Is your favorite DAC lacking? Do you have the itch to stream without throwing out the DAC with the bath water?

If you’ve answered “Yes” to these questions, then you need a network player, otherwise known as a streamer, and Primare has a nifty little box that serves the purpose for a cool $600.

The Primare NP5 Prisma Network Player, which is the company’s Prisma network player technology in its own box, offers a number of connectivity options including Ethernet, WiFi, Bluetooth, Spotify Connect, AirPlay 2 (with a recent firmware update), and Chromecast built-in while the future of the NP5 sees the addition of Roon (yay!) via firmware update. Physical inputs include the aforementioned Ethernet/LAN, an old-school RS232 “Outboard System Control Port” for use with other Primare like-endowed components, and USB-A for attaching USB storage. The NP5 has been tested with USB storage devices up to 2TB on NTFS and 512 GB on FAT. The NP5 employs a wall wart power supply for its 5V power requirements.

Digital outputs total 2x S/PDIF (Coax and Toslink) which support PCM resolutions up to the S/PDIF limit of 24bit/192kHz. DSD up to DSDS128 is supported from the USB input but DSD is converted to PCM before leaving the NP5.

I’m a fan of physical connections, call me old school, and I’m also a fan of Roon which presented a kinda conundrum since Primare has yet to roll out Roon for the NP5. This left me with a number of alternative connectivity/playback options — Google Chromecast, which supports PCM resolutions up to 24bit/192kHz, using Roon as control, AirPlay 2, limited to CD-quality, using Roon as control, or roll with UPnP player software like mconnect. While the Ethernet input is plug, wait a minute or two, and play, WiFi setup requires the use of one of three options including the Google Home app, via the Prisma app for Android users, and via AirPlay / WiFi settings for iOS people.

The NP5 does not have any physical controls, why would it?, and sports 3 LED indicators on its top side which illuminate in various colors to indicate the active source and system status. The matte black plastic case has that nice tactile rubberized feel and the NP5s diminutive size (143 x 36 mm x 125) allows for out of sight out of mind placement.

Primare pushed out a firmware update during the review period which offered at least one welcome change — prior to this update, you had to select a fixed output resolution (48kHz, 96kHz, or 192kHz). After the update, you can choose to let your PCM flow in its native resolution or choose from additional Fixed options (44.1kHz, 48kHz, 88.2kHz, 96kHz, 176.4kHz, or 192kHz). I went Native for the serious listening part of the review. The app also includes a Balance control, Startup Volume level, Maximum Volume, Mute Volume level, Fixed or Variable output (for variable out level is controlled through whatever app you’re using), Standby setting (to determine how long before the NP5 goes into Standby mode when not in use or Never), Bluetooth visibility, and Bluetooth Auto Reconnect.

I was hoping Roon would have come with this ride, but alas it wasn’t so. I did ask the “When” question re. Roon Ready, and there’s no fixed date to share at present. I’ll say soon, in the non-audiophile sense of the word to keep expectations in check. 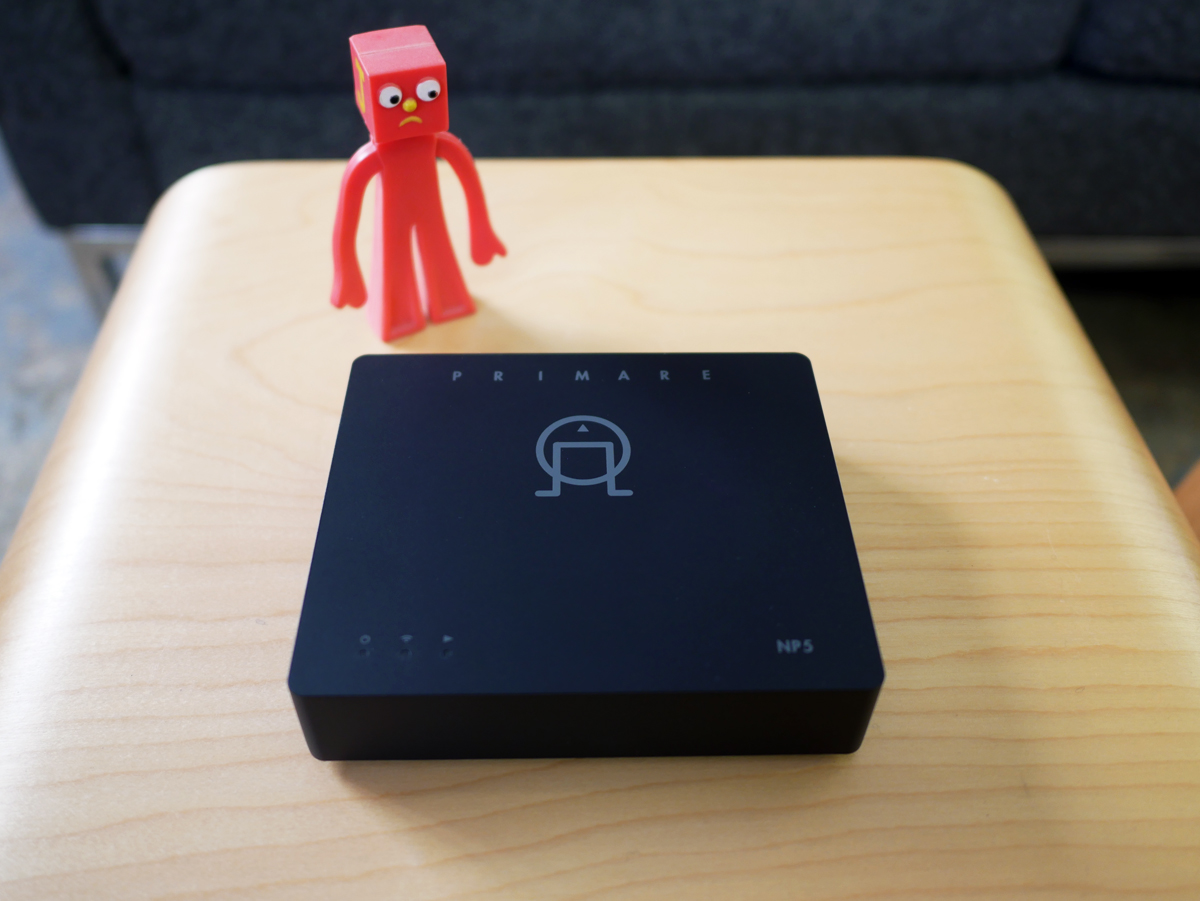 How Do You Listen To A Network Player?

The short answer: you don’t. Like everything in hifi, you listen through a network player to the sound of a system. This may seem like a subtle or even nonsensical distinction but it’s not because overall system performance directly impacts our ability to hear a difference when we swap something out. The more revealing the system, and the better the room / setup, the more obvious changes become. What may seem nonexistent or too subtle to care in one system / room, may make welcome and wouldn’t want to live without improvements in another. Not to mention the listener’s level of interest (or intent). Them’s the facts regardless of what people say to the contrary on the Internet.

Let’s get the confessionals out of the way — I am an unabashed Roon lover. There, I said —it. Roon is, to my mind, the best solution in extant for file-based playback as it offers near plug and play setup, cross manufacturer support, seamlessly integrates server- and streaming -based music, while offering the best tool for music discovery known to man. All to say I hoped a firmware upgrade would arrive bringing Roon before Santa but I must forge on.

I mostly controlled the NP5 using Roon for the review period, surprise, surprise. There are two options for connecting to the NP5 when running Roon — Chromecast built-in or AirPlay. A comparison between these options quickly revealed Chromecast to be the clear winner in terms of sound quality. Since anyone with Roon and an NP5 will have the same choice, and comparing them is simply a matter of selecting one or the other in the Roon app, I’m not going to go into detail about the differences I heard. Chromecast is better sounding than AirPlay but feel free to try this on for size for yourself.

I also briefly rolled with mconnect(lite) on my iPhone, connecting to the NP5 via UPnP, and while I perceived slightly improved overall clarity, the difference wasn’t worth the pain and suffering of using mconnect as compared to running with Roon. In my experience, UPnP players make playing music from network storage and streaming about as enjoyable as wearing a straight jacket while playing badminton.

With all that being said, I ran with Roon for most of this review using Chromecast built-in. The Primare NP5 Prisma got to play with three different integrated amplifiers with built-in DACs during the review period — the Parasound Halo 6 HINT, the Bryston B135 Cubed, and the Hegel H95. The amplifiers drove the DeVore Fidelity O/93 speakers and I used a length of AudioQuest Coffee Coax cable to connect the NP5 to the amps. For comparison purposes I enlisted the Bluesound Node 2i using its Coax output which obviously bypasses its builtin DAC.

In general, I found the Primare NP5 offered a nice clear and precise pathway for music to travel through. This lack of a strong sonic fingerprint remained consistent regardless of the accompanying integrated amplifier/DAC which means I’m confident these traits will travel with the NP5 and other DAC pairings. Phoebe Bridgers paired down, strings-only EP Copycat Killer offers an unobstructed view into her vocal style which is unforced, breathy, rather delicate and wispy. The NP5 offered up a crystal clear version of this recording in full living color. This refined clarity was apparent with all of the music I played through the NP5 for the weeks I spent using it in my system(s).

Switching to the HiFi Bargain Bluesound Node 2i highlighted the NP5s clean sonic traits by offering up a more colored-sounding version of reproduction. As I shared in my review of the Bryston B135 Cubed Integrated Amplifier, the NP5 offers more apparent resolution and a more refined sound when compared to the Node 2i. While not a huge difference, if I was looking for a long time partner for my DAC, I’d opt for the NP5 in this scenario as it allows for a more compelling sound. It’s worth noting that the NP5’s output maxes out at 24bit/192kHz which is not an issue for me but for ultra-high-res buyers and DSD lovers, you may want to look elsewhere since the NP5 does not offer bit perfect replay for these higher PCM resolutions and DSD.

Back in my AudioStream days, I reviewed a lot of network players. These included the microRendu ($399) and Signature Rendu ($4490) from Sonore, the Bricasti M5 Network Player ($2900), and the dCS Network Bridge ($5625) to name a few. I also reviewed the totaldac d1-streamer (5500euros excl VAT) right here. Among this group, the dCS and totaldac stood out head and shoulders above the rest so for those looking for the best, cost be damned, I’d recommend one of those two. If you need USB out, the Bricasti comes highly recommended.

In terms of how much I’d recommend spending on a network player as a % of what was spent on the much more important DAC or DAC-endowed component, 20% – 30% seems like a good ballpark to play in. If you’ve spent $20k on a DAC, the $5600 dCS makes sense (to me). If you’re using something like the wonderful Hegel H95 ($2000), the NP5 would make for a good system match. Once you think about pushing that 30% number, I’d consider putting more money into the DAC or DAC-endowed component since they offer the possibility of greater overall system improvement. 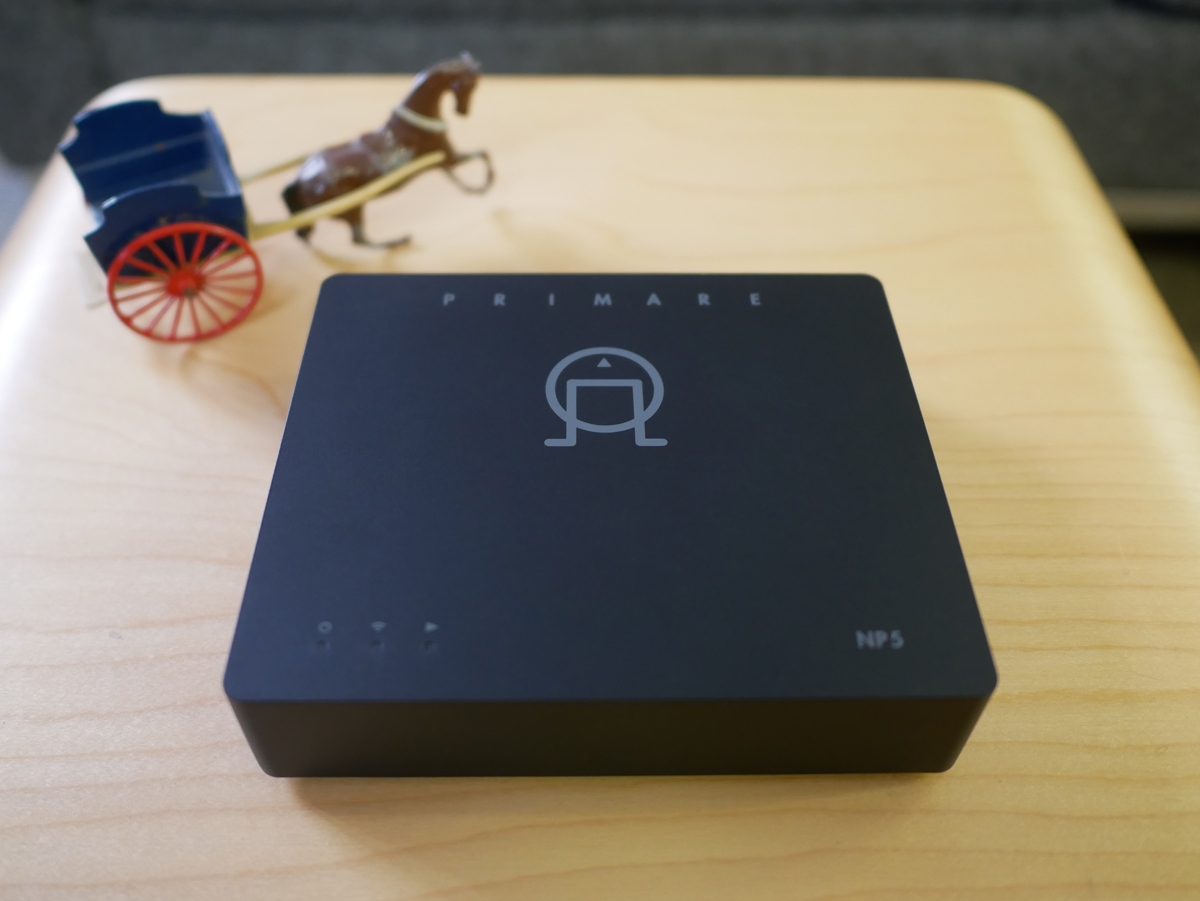 The Primare Prisma NP5 is an easy component to recommend. It offers fairly transparent play-through, it doesn’t cost an arm and a leg, while offering a number of high-res capable connectivity options including Chromecast built-in with Roon Certification in the works.