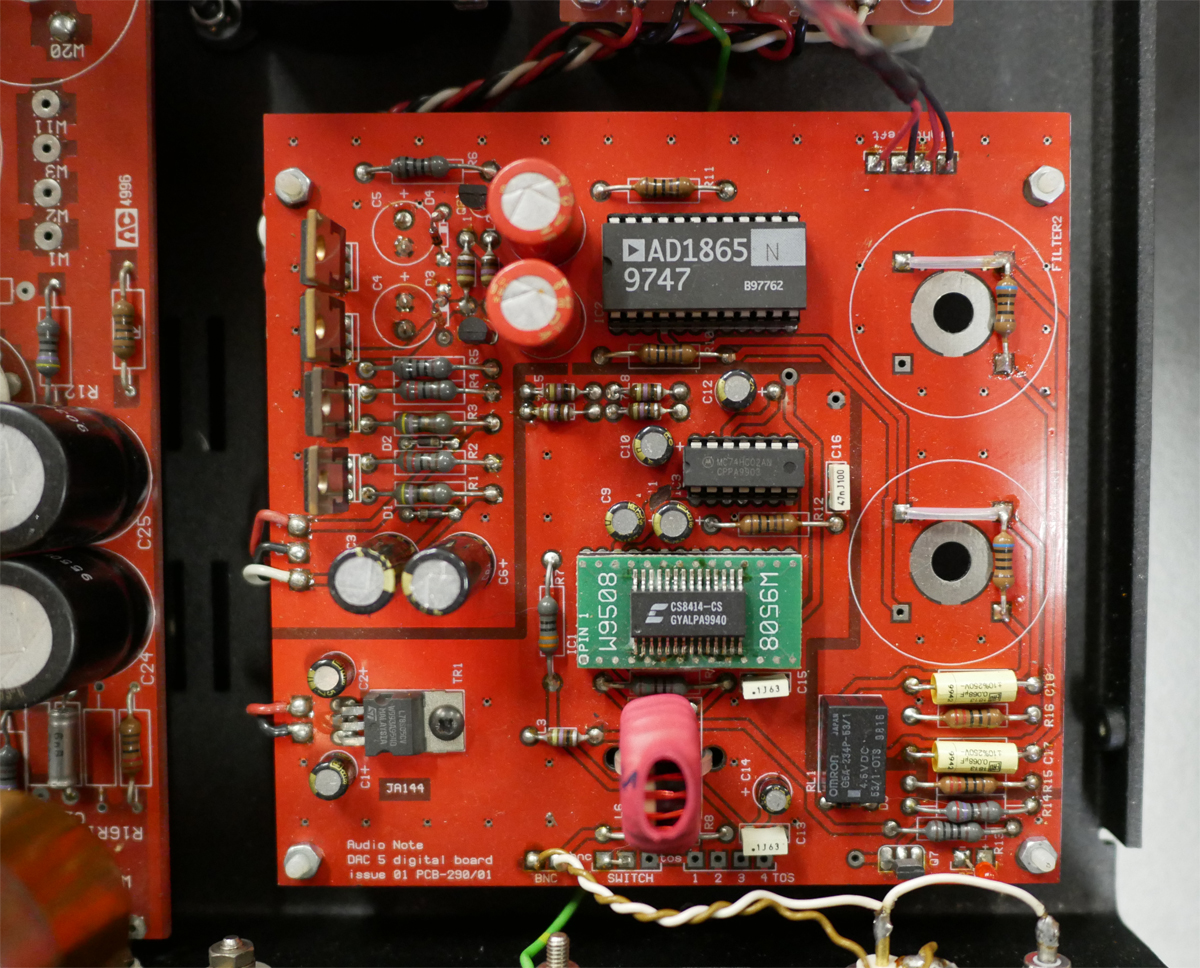 The unit under Flashback-Fi was built in 2002 and upgraded at some point thereafter with the addition of a DAC 5 digital board which employs the Analog Devices AD1865 18 bit D/A chip, the same chip found in current production Audio Note DAC 4.1x DACs. The DAC 4 is a non-oversampling, digital filterless DAC using and a pair of E182CC / 7119 dual triodes in the Class A output stage. There is an analog filter employed using a single-pole filter/interstage transformer combination. 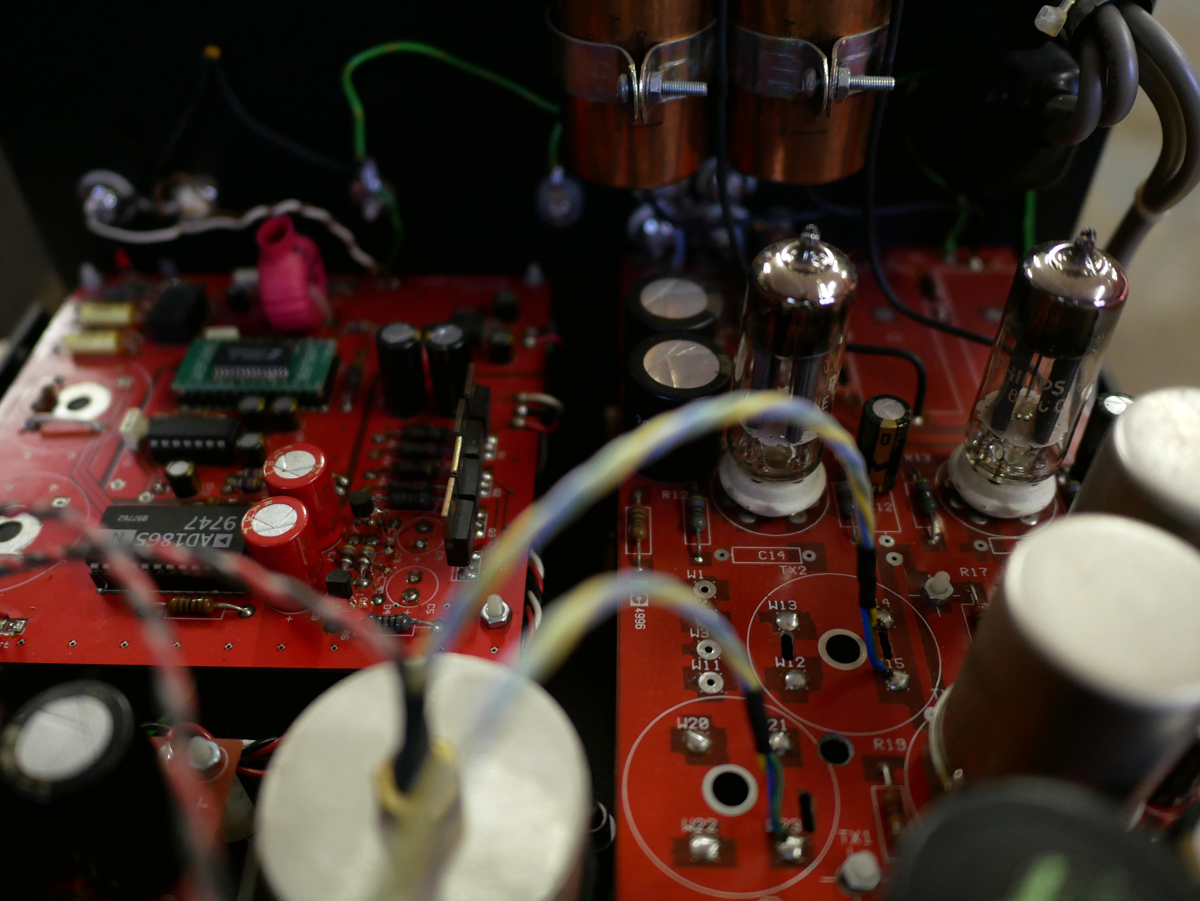 The DAC 4 Signature’s entire chassis is solid copper (painted black) and along with those massive-for-a-DAC transformers makes this the heaviest DAC I’ve had in Barn. 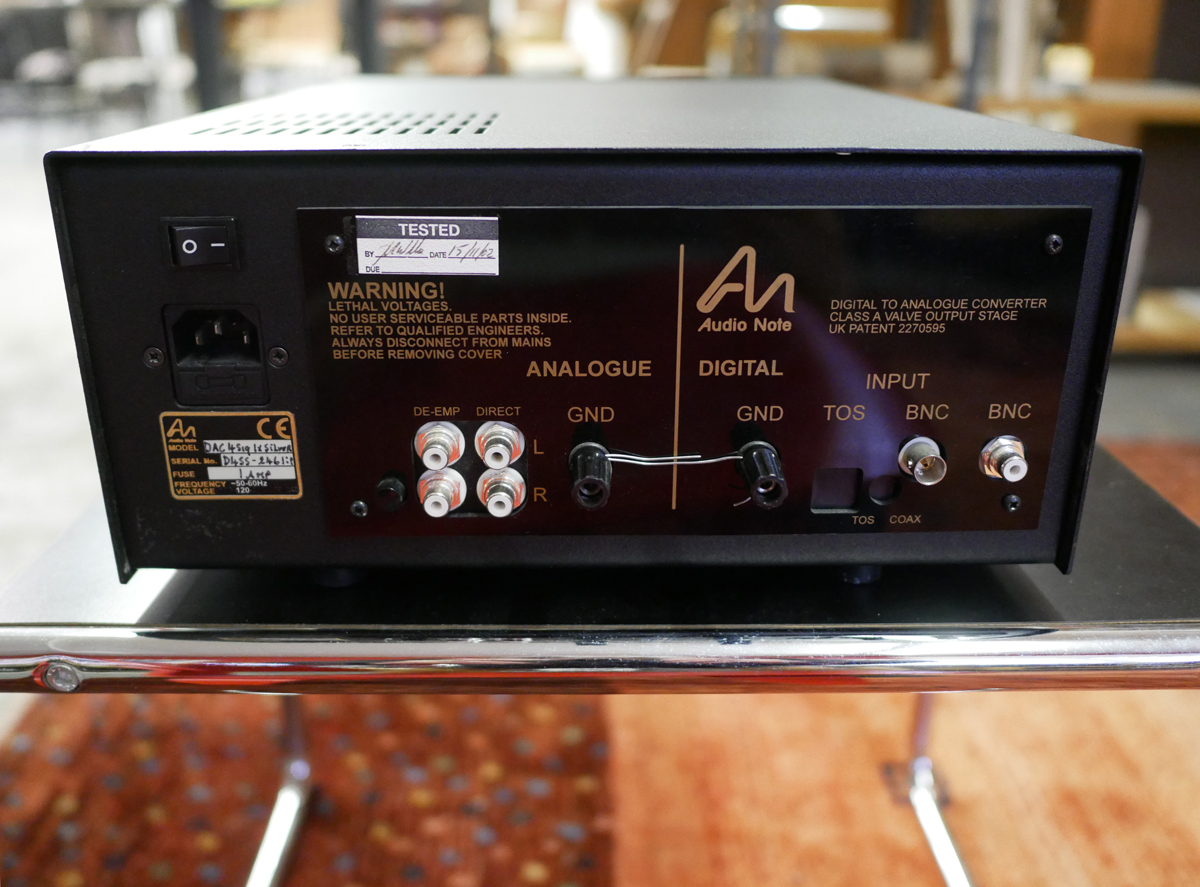 As you can see, inputs options are limited to Coax S/PDIF (BNC and RCA) with two single-ended RCA outputs with one marked “DE-EMP” or De-Emphasis output which applies a high frequency roll-off filter originally meant to be used when playing back a CD with pre-emphasis, and a “Direct” output. I stuck with the direct output. 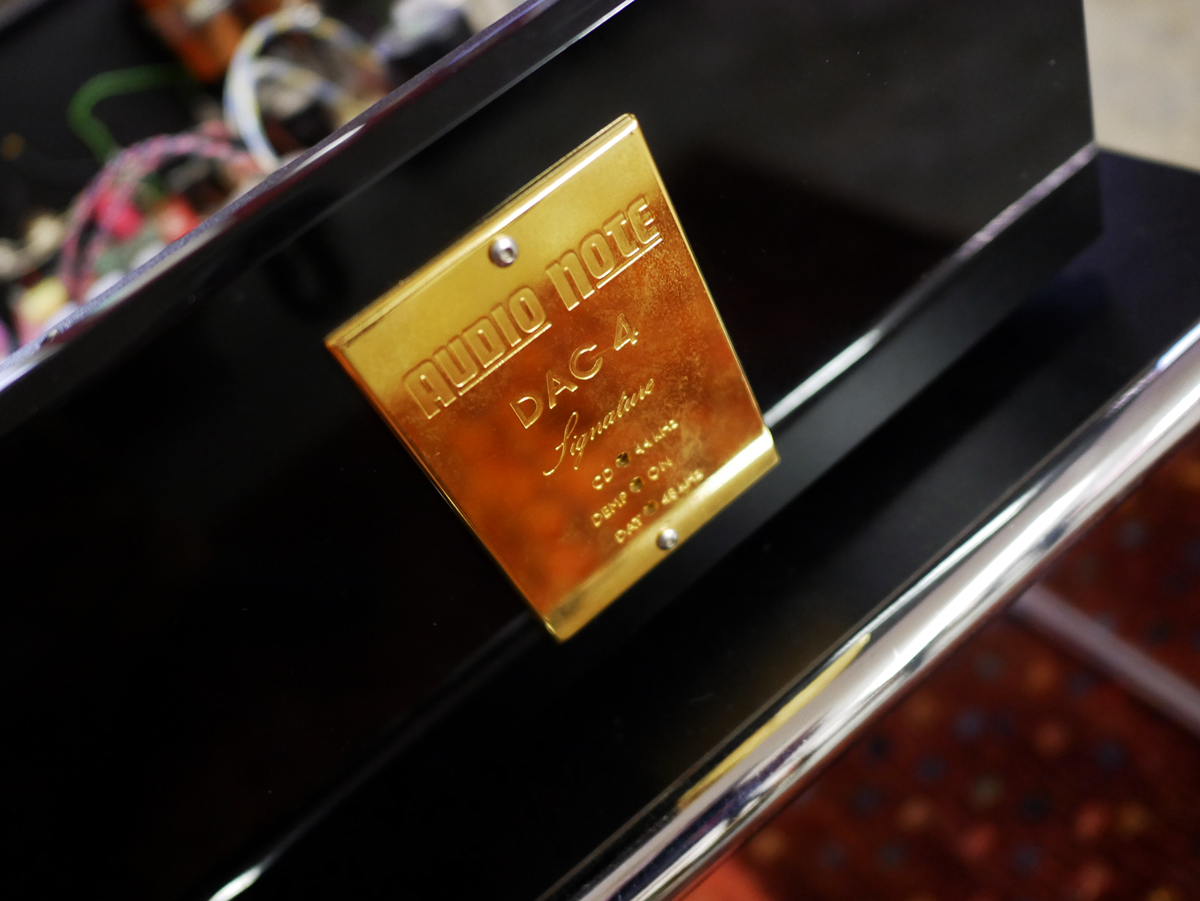 You might think that since the AN DAC 4 is such a heavyweight brute, literally speaking, this may translate into an equally husky voice. After all, when we encounter a large human with a high-pitched voice our reaction is innately one of surprise so it should come as no surprise to learn that the AN DAC 4 is a meat and potatoes kinda DAC deal when it comes to its sonic signature. Think big and beefy.

Parliament’s “Flash Light” is one funking great track and if your hifi fails to get you up out of your listening chair after about 4-seconds of its funk, somethin’ ain’t right. The Audio Note DAC 4 packs on the funk poundage by giving this music its deserved heft, driven by one of most distinctive and badass Minimoog bass lines courtesy of Bernie Worrell. Most of all he needs the funk / Help him find the funk.

In addition to its funk-loving heft, the Audio Note DAC 4 is also a rich sounding DAC, with a very nice sense of each instrument’s distinct voice given full sway. Lightnin’ Hopkins’ Live At Newport, recently recommended by my friend and colleague Herb Reichert, sounds ripe with that amazing mix of relaxed energy that Lightnin’ Hopkins could pull off in his sleep. This is simple music, a man and his electric guitar, which some may think means its easy to reproduce but I beg to differ — classic blues typically sounds anemic when converted to digital and back to analog again as if the D to A process removes this music’s soul. As if digital has no rhythm. Through the AN DAC 4, Lightnin’ Hopkins retains his wonderful rhythmic drive due in part to the richness of the reproduction coupled with a very nice sense of dynamic slam.

Where the AN DAC 4 falls a bit behind today’s better DACs is on the micro-level. The super subtle viola that joins Tom Waits on “I’m Still Here” in the opening of that heartbreak of a song is very nearly imperceptible through the AN DAC 4, reproduced far off in the distance as if a thick fog rolled in between it and Wait’s vocals and piano. That said, Waits’ voice and piano sound superbly rich and big and filled with emotion. Ripe.

The senior citizen CAL Alpha Tube DAC sounds much more fleet-of-foot as compared to the Audio Note, nearly able to run rings around the AN’s slower-sounding heft.  While the AN sounds comparatively a bit thick, we’re talking trade-offs, as is the case with nearly every hifi comparison, since we could call the CAL DAC comparatively lightweight. One big plus for the Audio Note’s heavier hand reveals itself with less than wonderful sounding recordings. Where the CAL DAC emphasized edges, the AN emphasizes body. The Voudon Effect by Orchestre Poly-Rythmo de Cotonou that kinda fell apart into a compressed and edgy mess through the CAL Alpha became a rich, boogie-laden wonderland with the Audio Note at the helm. The less than great quality of this recording is still evident but the Audio Note’s sound signature makes for a very agreeable translation.

Bauhaus’ In The Flat Field, which recently turned 40, loved the Audio Note DAC 4 as did PJ Harvey, The Birthday Party, Boris, IDLES, Fontaines D.C. and every other heavy hitter in my virtual music library and I was more than tempted by the AN’s sonic character to run through this kind of music for days on end with sheer delight. Damn, I hadn’t been driven to listen to Steppenwolf’s self titled debut from 1968 in ages! Thank you, Audio Note DAC 4 Signature. That album rocks, hard. 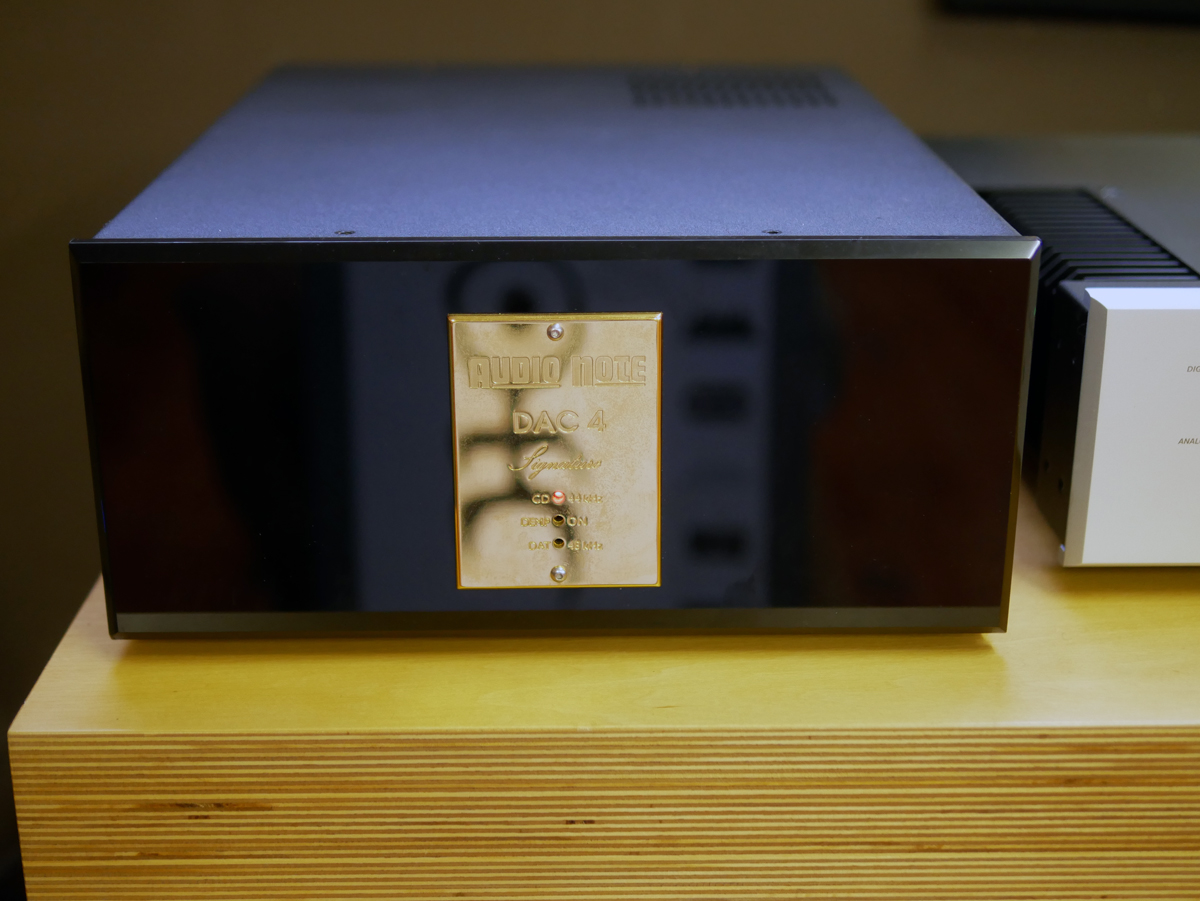 Here we have another trip down digital conversion’s memory lane that has nary a hint of nostalgia when it comes to sound. It’s no wonder Audio Note still employs the same DAC chip in their current production DAC 4.1x as found in this 18-year-old heavyweight of a DAC. Some recipe’s remain tasty regardless of age.