You can think of the ALTAIR G1 as a one-box solution for all of your streaming, serving, DAC and digital preamp needs. One and done.

Of course there are any number of streaming DACs on the market but very few offer a one and done deal that can match the full functionality of the ALTAIR G1. The recently reviewed HiFi Rose RS150b is similar on paper, but we’ll dig into some differences presently. With its optional 2TB of internal storage, the G1 can hold a modest or large (depending on if you think thousands and thousands of albums is modest or large, which probably depends on what year you were born) music library, while its support for streaming from Qobuz and Tidal (direct), along with Spotify Connect provides access to more music than anyone can listen to in a few lifetimes. 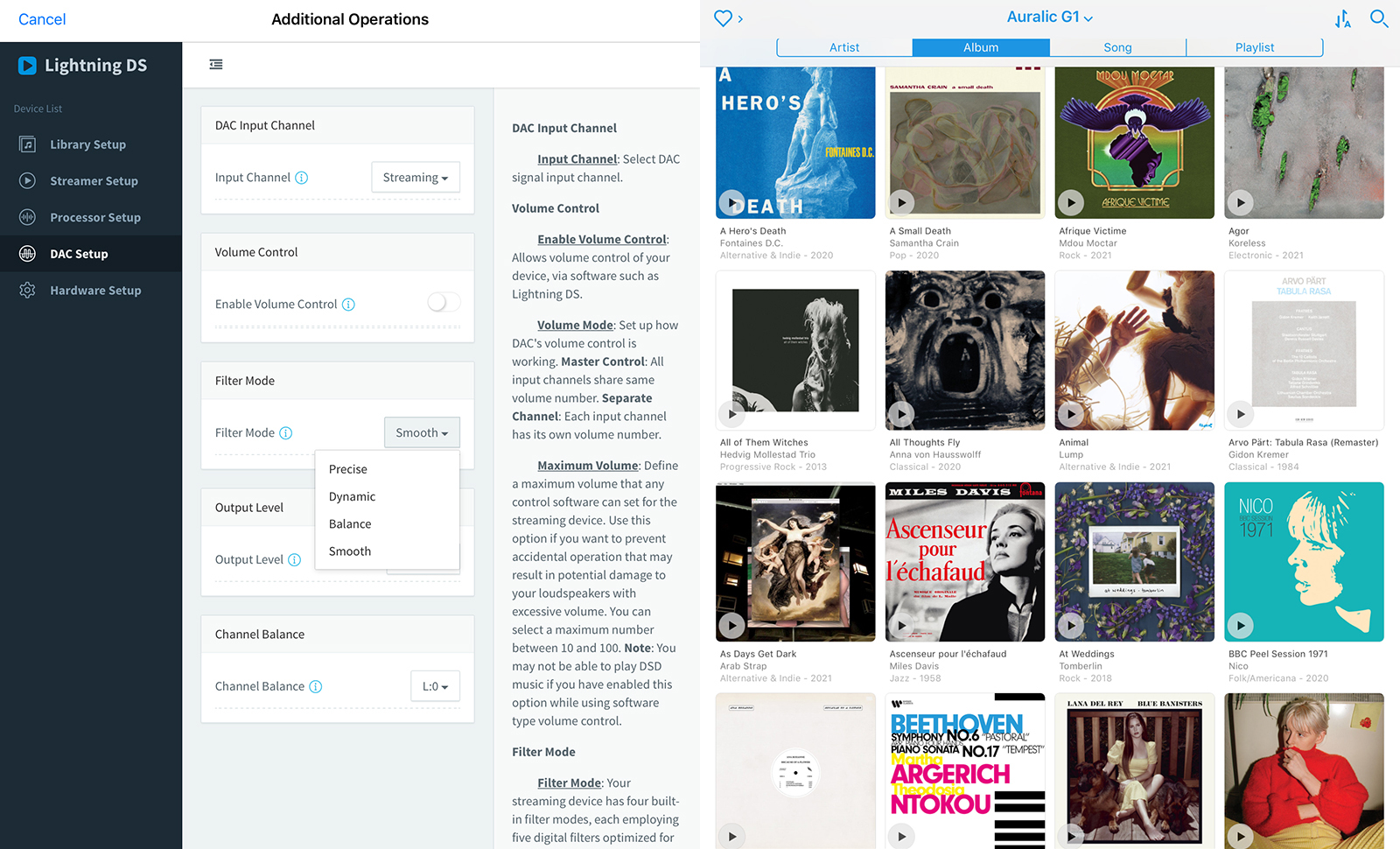 Auralic’s Lightning Operating System (OS) and associated Lightning DS app for iOS are the one-two punch in the G1’s one and done arsenal. Other players in this league include Bluesound, Aurender, and dCS to name a few who have also gone the distance to create a standalone hardware and software package. What this means is streaming products from these companies do not require additional stuff, like Roon, to play locally stored music or from supported streaming services. 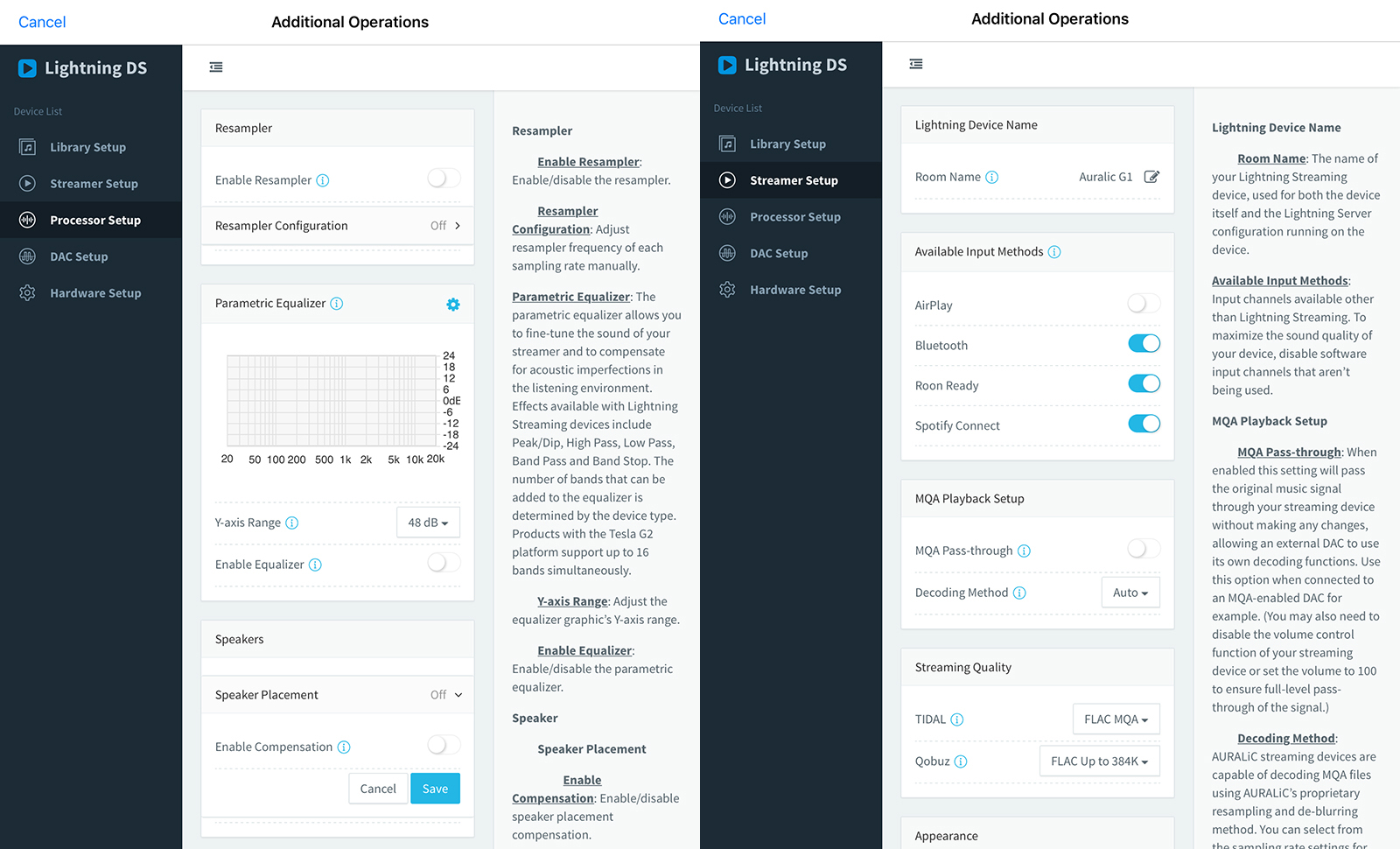 Regular readers know of my fondness for using Roon to control music playback and while Auralic’s DS app does not match Roon’s depth of features, it is very user friendly and straight forward and I can see some users preferring it to Roon for these reasons. 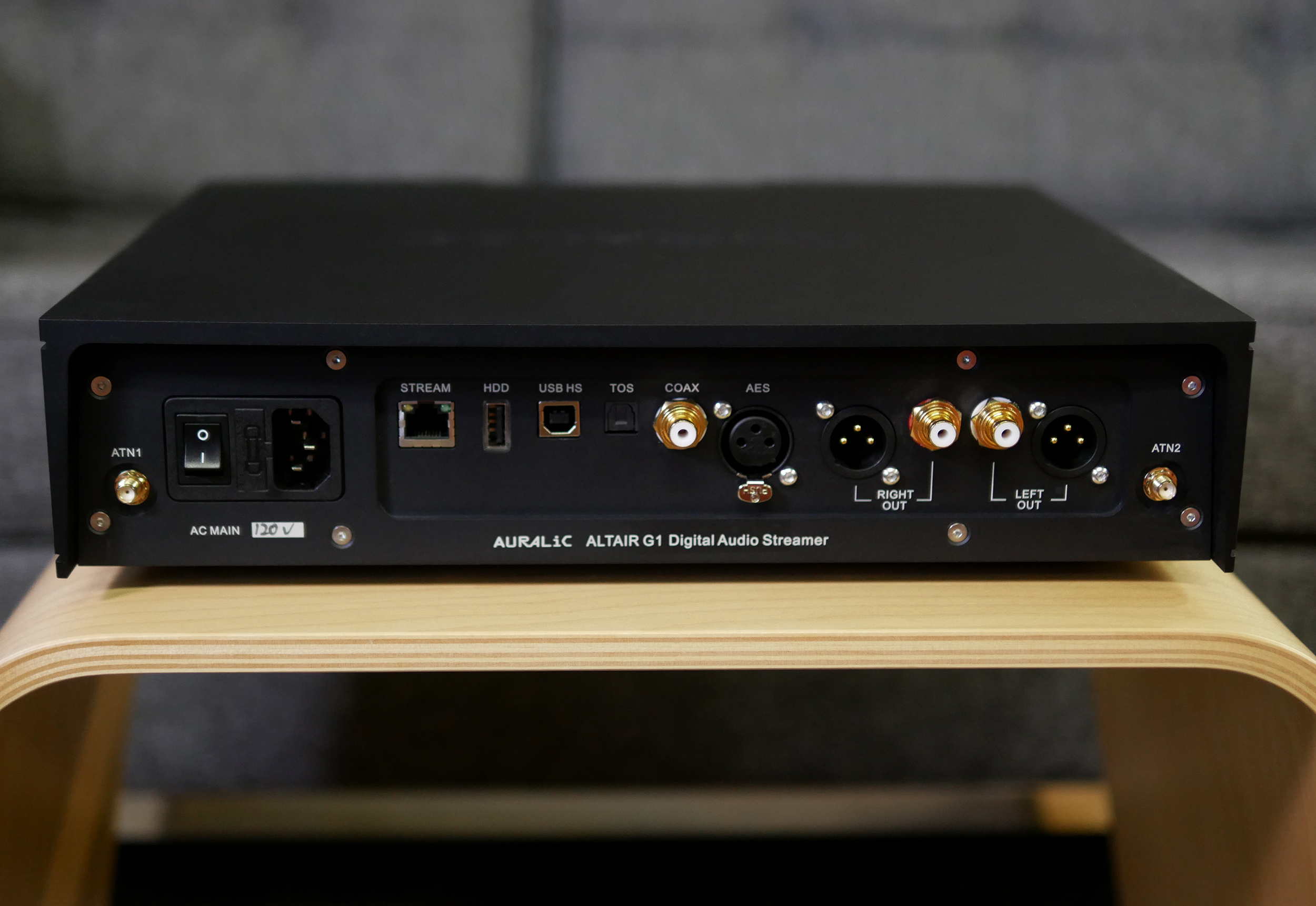 On the hardware side, the G1 offers a number of digital inputs (AES, Coax, Toslink, USB, Ethernet) along with single-ended RCA and balanced XLR outputs (there are no digital outputs). A pair of what we used to call ‘rabbit ears’, i.e. WiFi antennas, attach around back. Using the aforementioned app, the G1’s output amplitude is adjustable (4.4Vrms max level), which can come in handy when using the G1 to drive a power amp. You can connect to the G1 over the air using Bluetooth and Apple’s AirPlay, both being easy solutions for less than stellar sound quality. Think friends, family, and party. 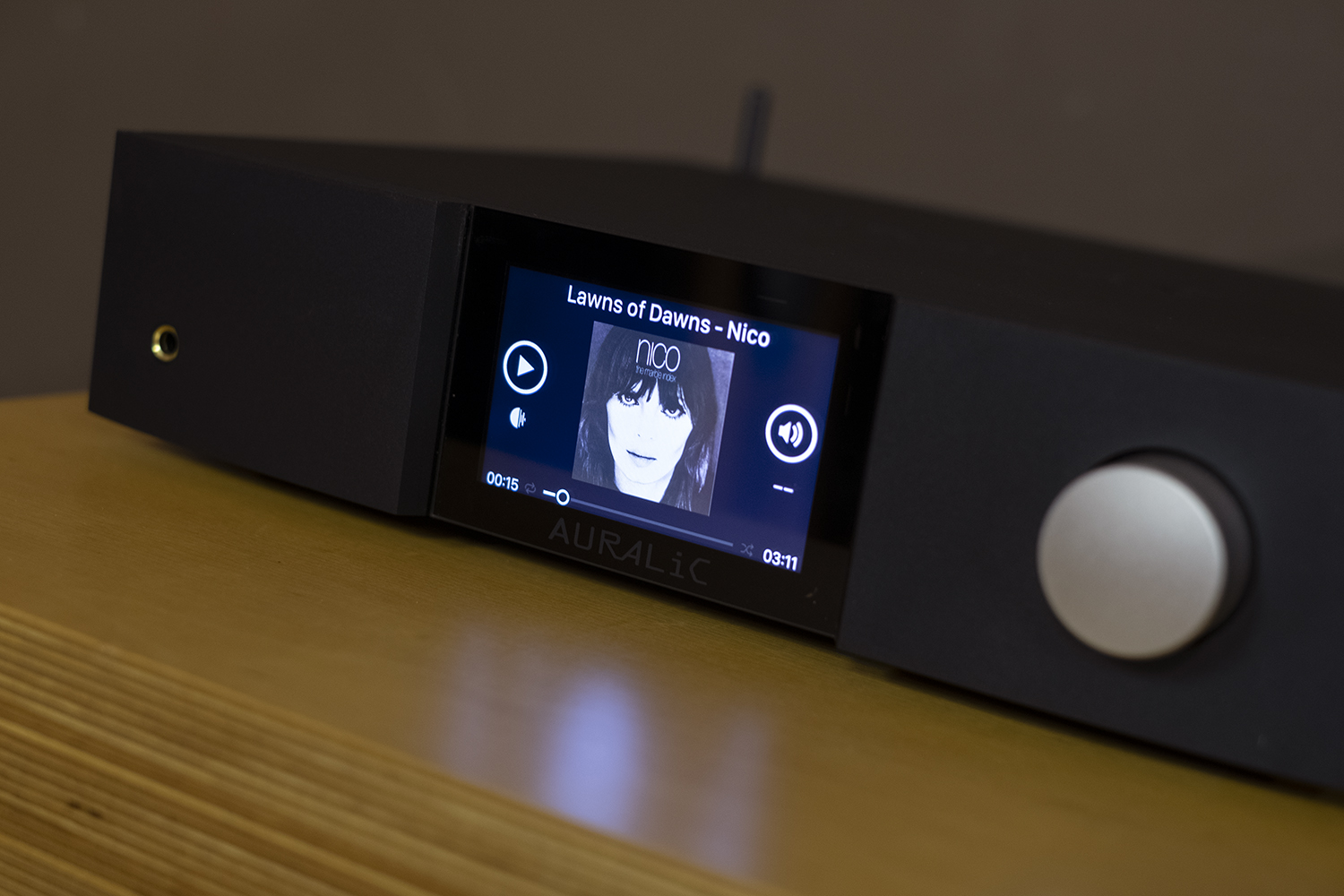 The G1’s front panel masks its many features, offering a 1/4” headphone jack, 4-inch high-res color display (> 300ppi), and rotary control knob that can be used to adjust volume, and with a push, it provides access to the same set of features available through the DS app. The G1 is wrapped in a matte black aluminum shell that I find to be understated in the best way. Deceptively simple. 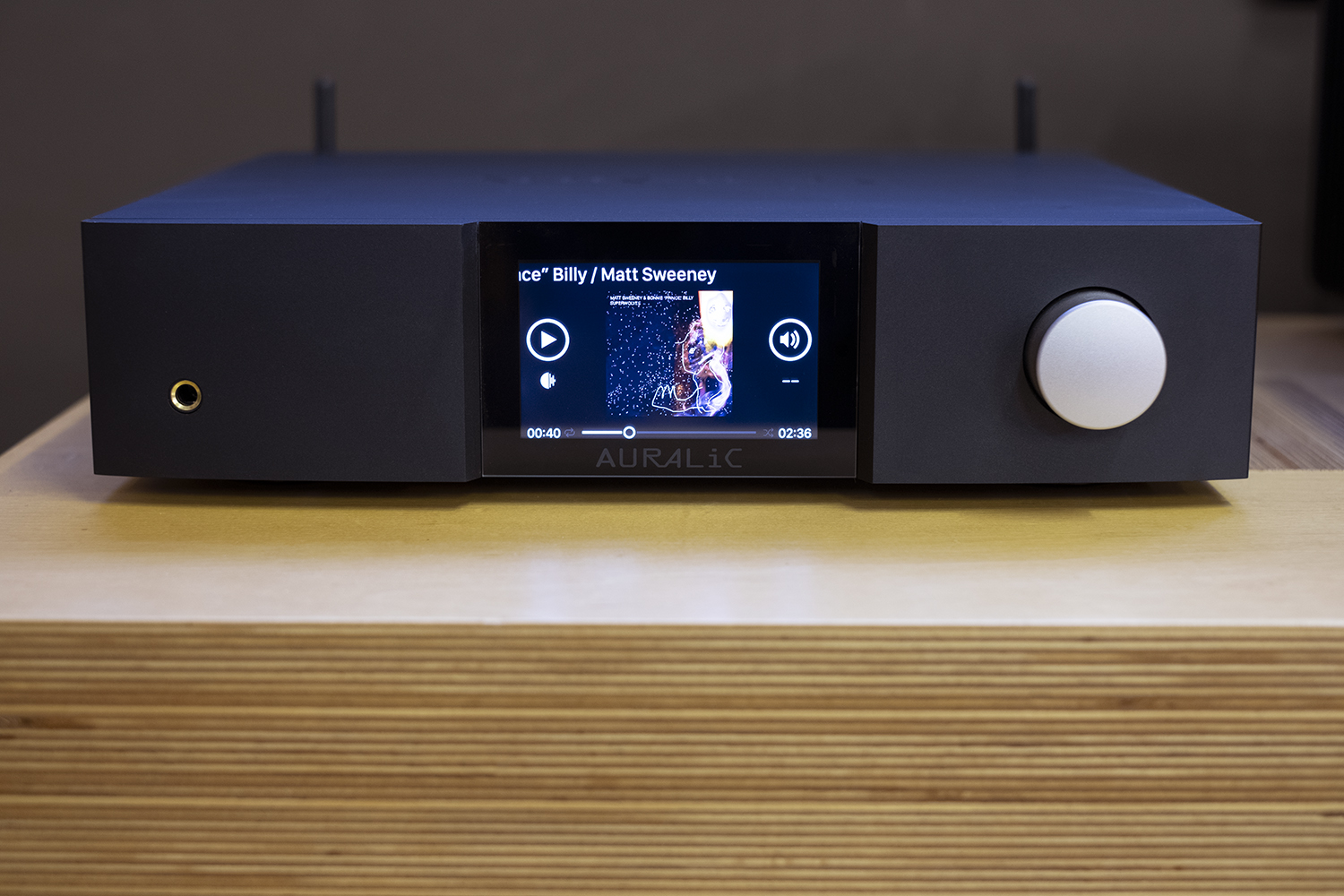 WIth devices like the G1, it pays to read the manual. You could simply poke around the menu with the app or rotary control and hope you cover all of the G1’s functional bases and as long as you’re being methodical, you may just get the complete picture. That said, you may very well miss things like the G1’s built-in Parametric Equalizer, the DSP-driven Speaker Placement Compensation filters, or the ability adjust the resampling frequency for each incoming sample rate. Whew! While that’s a short paragraph, you could easily spend real time optimizing the daylights out of the G1’s analog output. Auralic also provides a browser-based interface that provides access to these hardware settings (not playback).

The G1’s DAC is built around the ESS 9038Q2M converter and all incoming data is scrubbed through the Dual 72fs Femto Clocks, while Auralic’s Tesla G2 processor allows for playback of full tracks from its buffered memory while providing the juice to run all the G1’s DSP functions.

Looking way back to April of 2013, here’s what I said about the Auralic Vega DAC:

“Everything I played through the Auralic Vega was equally wow-inducing. Everything. . . . Music I’ve heard hundreds of times was presented with a crisp, clean, and delicate clarity that was simply uncanny and made things old, new again. . . . Its ability to turn music reproduction into an engaging and thrilling musical experience is simply stunning.”

That counts as a rave in my book and I ended up living with the Vega for some time thereafter. I bring this up to point out that Auralic has been at this game for many years and they’ve continued to build up their technology arsenal that is embodied in the Altair G1 Digital Audio Streamer.

System context for the G1 consisted of the DeVore Fidelity O/96 and Perlisten S7t speakers driven by the Constellation Inspiration Integrated 1.0 and Riviera Labs Levante. I also let the G1 run with the stout Parasound JC 5 Stereo Amplifier solo. All cabling was provided by AudioQuest and everything powered was plugged into a Niagara 3000 power conditioner. 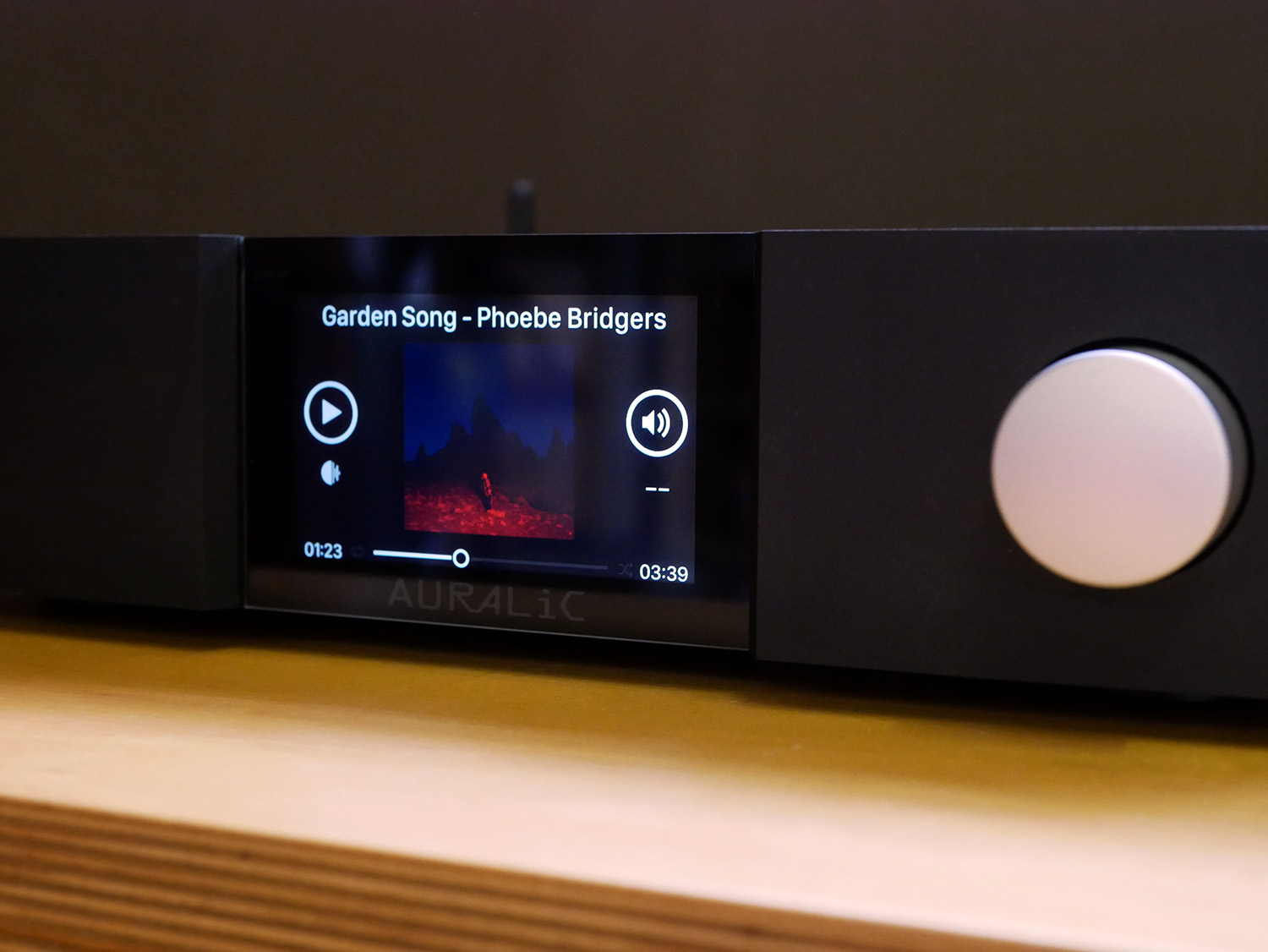 “Crisp, clean, delicate clarity” also holds true for the Auralic Altair G1. To my mind, when a company’s products have a house sound that moves from piece to piece over time, we’re talking about a company with a steady vision and process to attain their goals. The G1 proved to be a rock steady performer, presenting music, streamed or stored, as if encapsulated in noise-proof containers.

I’ve come to associate aspects of digital presentation like clearly defined players in a clearly defied sonic space along with nicely developed timbre and clarity, coupled with a lack of grittiness and hard edges as a good indication that the DAC doing the converting is doing a good job of keeping noise out of the signal/system. If my hunch is right, the G1 is one quiet performer.

Sarah Mary Chadwick’s voice and piano on “Full Mood” from her wonderful Me and Ennui Are Friends, Baby album was all delicate and detailed, expanding in the barn to recreate the recorded space, with keyboard sounds slowly fading into silence.

The G1 also does a fine job of hanging onto the scale of the recording. Einstürzende Neubauten’s “Bloom” from their unusually friendly 1993 album Tabula Rasa contains any number of sounds coupled with Blixa Bargeld and Anita Lane on (creepy) vocals:

Euphorbia
a blue dahlia, a black tulip that’s where opinions differ the scholars disagree
My name, should you know it remains unspeakable and is spoken — malediction

Every pluck and accompanying harmonic coming off of Blixa’s guitar ring out true, while the Sturm und Drang of the boys in the band ominously grind away in the background, creating more tension than a rubber band stretched to its limit. Tight!

I spent some time comparing the Auralic G1 to the HiFi Rose RS150b and it’s apparent that the G1 is the more mature product. This goes for nearly the entire package with the exception of each unit’s physical attributes as they are both very nicely put together. But in terms of operation, interaction, and sound quality, the G1 walks away the clear winner with its more refined and richer sound. While the HiFi Rose’s display is bigger than the G1’s, for my use-case scenario, i.e. listening to music, bigger in this case did not equal better since the album art displayed on either screen was nearly the same size — small compared to a 12-inch.

The G1 also fit very nicely into more upscale systems like the Constellation integrated 1.0 driving the Perlisten S7t speakers, or the Riviera Labs Levante driving the DeVore O/96. While not a fair comparison in terms of price, the totaldac d1-tube DAC/Streamer (7500Euro/about $8400USD review) offered even greater resolution, more saturated tone colors, and an airier sound image as compared to the G1, but I would hope to get more when spending more than 2 and 1/2 times more. 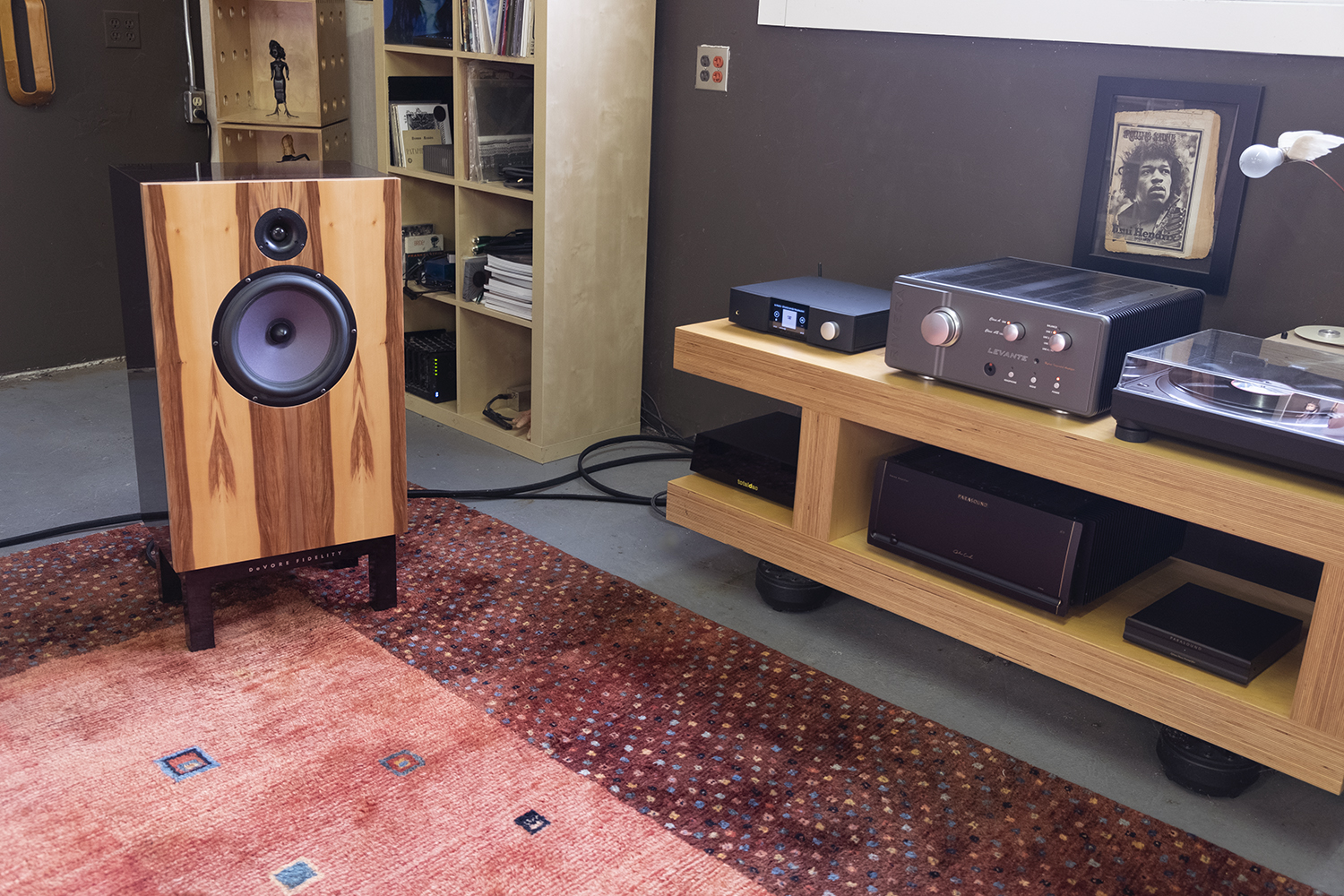 Some people don’t want what they perceive to be extra stuff in their audio chain, like a preamplifier, when their streaming DAC, like the G1, can act as digital preamplifier. So I leashed the G1 directly to the Parasound JC 5 Stereo Power Amplifier, and I mean power!, with lengths of AudioQuest Earth XLRs and hit Play.

Please picture the music presentation as a dancer. With the G1 direct into the JC 5, this dancer was muscular, wiry, and sporting pumps with structurally significant heels. Boom, slap, whack! Polly Jean Harvey’s rough and ready take on Willie Dixon’s blues standard “Wang Dang Doodle” was all power play, all business with stops and starts as clean as the proverbial whistle. Brutish pure energy.

Through the more affable, to my ears, Riviera Labs Levante Integrated Amplifier bypassing the Auralic’s volume control, this same dancer took on more grace and charm (to my ears), while still delivering plenty of PJ’s raw power. I almost always prefer a preamp in a system, even when its part of an integrated package, because music nearly always sounds more fully formed, more fully realized. But if you prefer the idea of going direct because, you know, distortion, the G1 can accommodate such flights of featherless fancy.

While the Lightning DS app is a pleasure to use, I admit that I spent most of my time using Roon as playback control because I rely on some of its features, namely Roon Radio pulling from my NAS-based library, Tidal, and Qobuz to remind me of favorites or introduce me to new music on a daily basis. I did spend some time with the AudioQuest NightOwls wrapped around my head while plugged into the G1’s front jack and let Acid Mothers Temple & The Melting Paraiso U.F.O.’s “ESP (Experimental Spooky Peace)” from Are We Experimental? rattle my thoughts around until I felt, amused. The G1’s presentation through the NightOwls was also crisp and clean with delicate clarity and wholly engaging.

Back in speaker land, I settled down with the Riviera Levante / DeVore O/96 / G1 combination for my last week of listening, basking in this systems’ ability to deliver a musically captivating experience regardless of the music at play. Most mornings, just before I walk out our front door headed to the Barn, a song will come to mind and play in my head like some internal jukebox with a mind of its own. Lately, Lana Del Ray’s “Dealer” from Blue Banisters has shown up more than once and when a song suggests itself so strongly, I just have to listen to it after my house to Barn commute. Like an itch that needs a scratch. This system more than satisfied that itch by presenting “Dealer” with all of its slow groove and pain on full display. Nice. 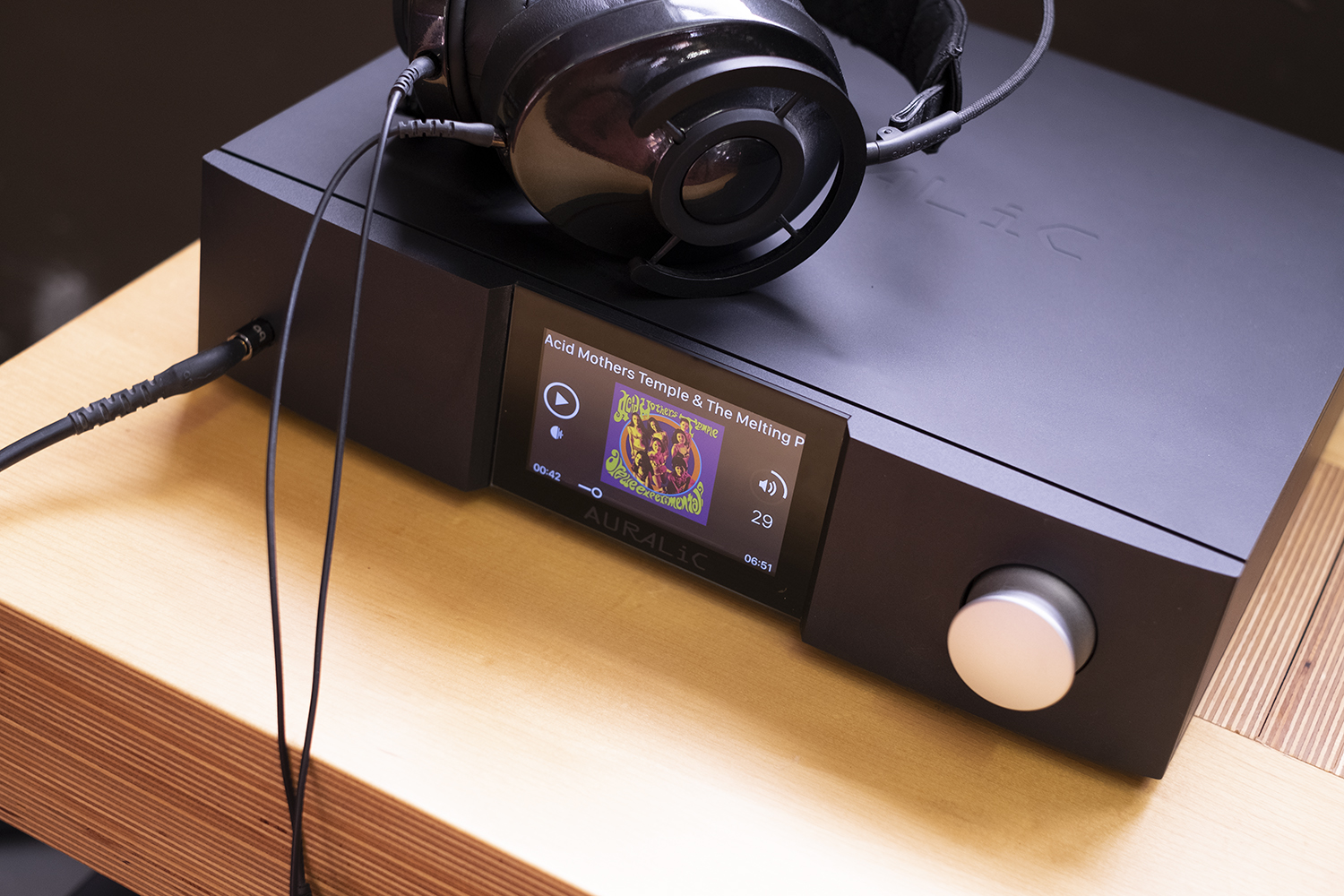 If you’re on the lookout for a complete digital audio streaming package, and one that includes its own user-friendly app offering access to Tidal, Qobuz, and more (plus Roon for those so inclined), that delivers a finely refined sound that serves the music at play, look long and hard at the Auralic Altair G1.